Find more photos like this on Chris Gentry Neighborhood Network 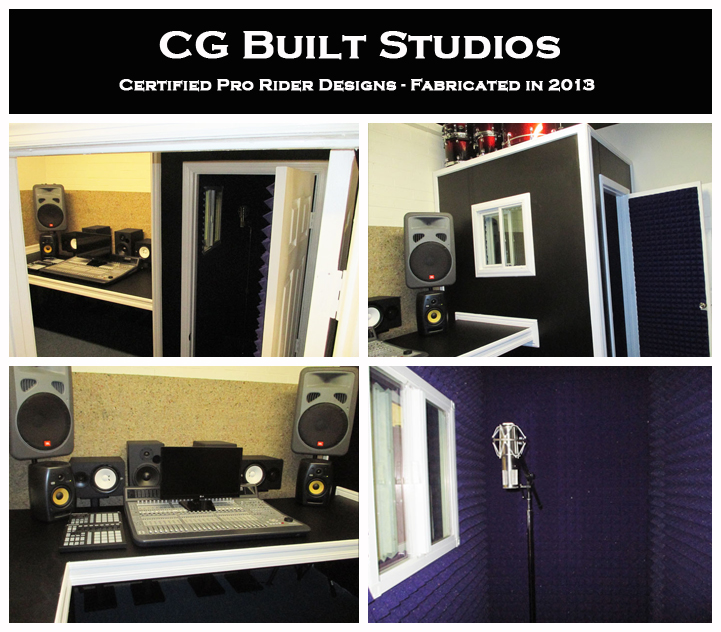 Here's a recording studio I built over the last 4 days for my good friends Tilo and Morgan Brown in Sherman Oaks, CA... A center dividing wall... vocal booth and custom desk with a black leather top... Certified Pro Rider style! 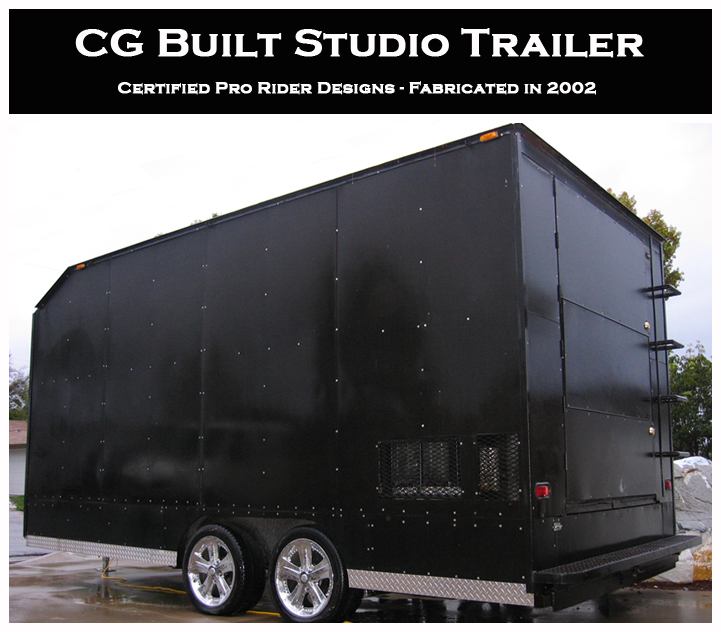 The mobil studio trailer was built in 2001 after the skatepark trailer was retired at Spohnranch ramps in the City Of Industry. CG built it all on a one man solo mission, that took over 6 months of grinding and welding from the back of another mobil tool trailer that CG built. 14 hour days one day at a time the studio trailer comes together.

The studio trailer frame was made with 1" steel box tubing with over 13 sheets of Skate Light attached. It has sound proof interior with 4 sided camera surveillance and storage under the floor. A 5000 watt generator to run the sound system, lights, AC Unit or you can plug an extension cord into any home plug and go to work, like right here in my homeboy Rogie aka Roger Muller's driveway in Costa Mesa, CA. 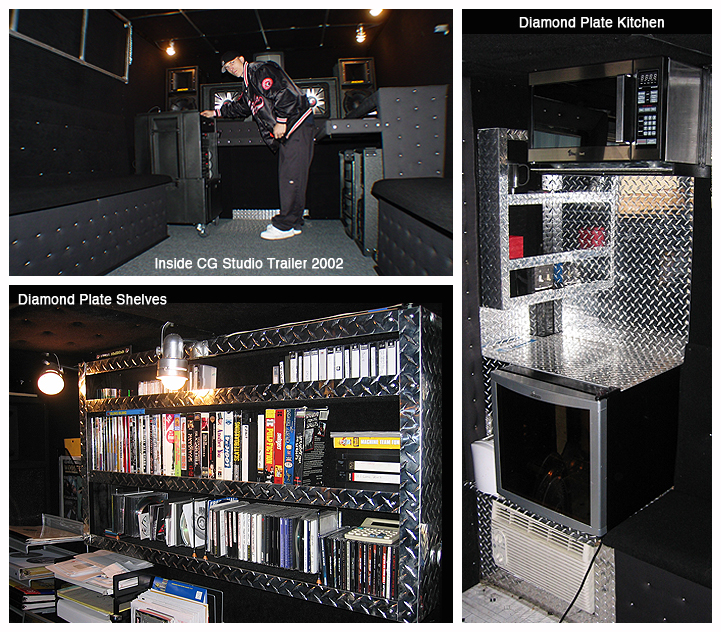 The walls are wrapped in velvet and the shelves are made of diamond plate and 3/4" plywood. It has a diamond plate kitchen with a microwave and refrigerator with an AC unit to keep it cool. The benches are diamond tuck and used as storage space. The bunk beds fold down and can be used as shelf space or sleeping headquarters. It's like a swiss army on wheels. Ridaz Gotta Have A Trailer. knife trailer for music and living the dream on the road.

The Kicker sound system bass on the CG studio trailer made all the walls shake like there was a California earthquake, while keeping your good eye on the outside world while watching TV, surfing the internet and talking on the phone, all at the same time. A mobile office where the Pro Riders Organization began. Also you can look out the back and see out through the 2 heavy duty swinging doors with 1' windows. 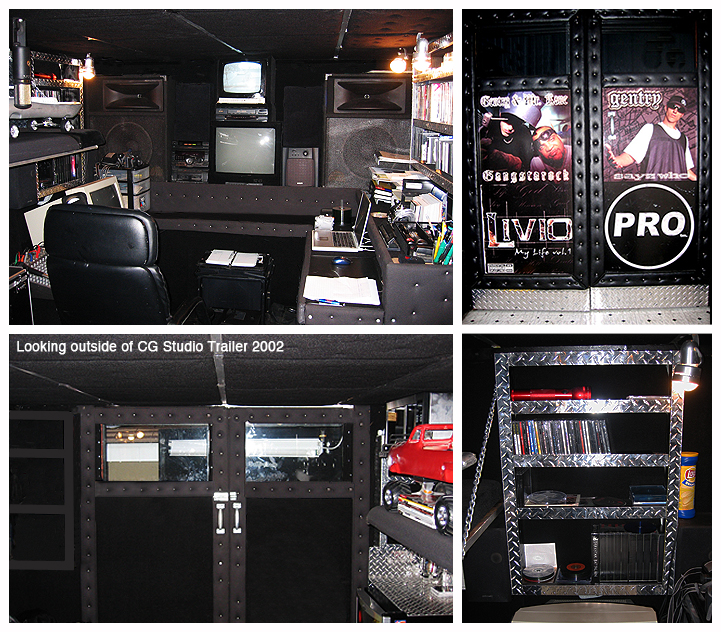 The back door swings open and drops down into a work bench. It also has an outdoor shop light to light up the spot and a side later to climb onto the roof with ease. Custom made by CG.

The bottom compartment is a door that folds down and gives you access to under the studio floor and store whatever you want. The 2 doors from the outside have a tuck and roll trim around the original Gangstarock, Sayz Who and Livio album with the original PRO Action Sports logo for Pro Riders Organization 2002. 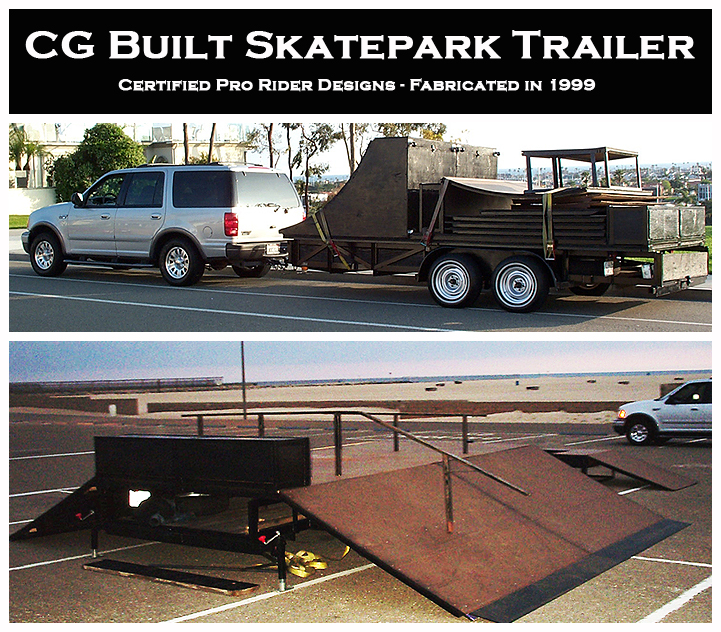 The CG Skatepark Trailer was built in 1999 for a "Skatepark Trailer Tour" around the West Coast and Midwest. CG built it all in 3 weeks solo with a welding machine, A double axle 16 foot trailer, a bunch of steel angle iron, plywood, heavy duty screws and 20 sheet's of skate light. 14 hour days of grinding and welding to create a unique fold out mobil skatepark trailer.

The master trailer set up consisted of a fun box with 8' section going bank to bank with a 1' x 8' ledge and the other 8' section went transition to bank. It also had a handrail with a kink and an adjustable flat rail to bank.

The skatepark trailer also had a 8' wide 6' tall bank and quarter pipe with a few flat rails and bank to bank side props. The whole set up was up and ready to skate in 1 hour with 4 people setting it all up. The PA system was constantly blazing the hottest hip hop music as Pro Riders took the course in front of local skate shops. Ridaz Gotta Ride! Skateboarding 4 Life! 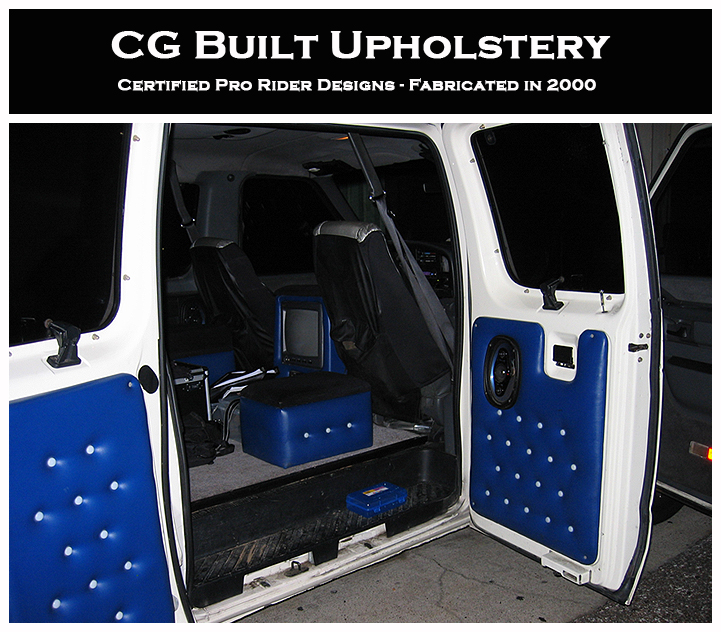 The 1996 van was givin to me by a good friend of mine African Rob out of Las Vegas. I met him in Hawaii in 1999 at the Snoop and Dre Reunion in Honolulu at Eminem's hotel in the lobby. Rob ended up being a great friend throughout the last 11 years and still Pro Ridin to this day. We laced the van with blue interior and a bangin ass system with DVD and plenty of room. This was the Pro Rider Office where PRO began in 2002. Thanks to Eminem and African Rob. Pro Rider Certified 4 Life. Ridaz Gotta Ride. 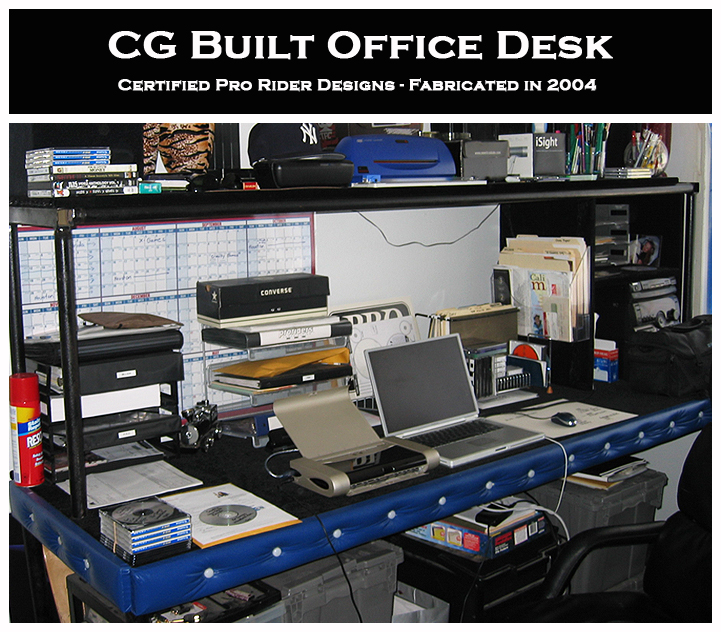 The studio desk inside the office was a matching piece to the van. I built it all in the Chop Shop from a metal scrap pit. Turnin nothin into somethin is how we do it. Ride on ya'll, Mr. Sticky is still buildin. Check out the new Projects on the "Ridaz Gotta Ride" TV Show. 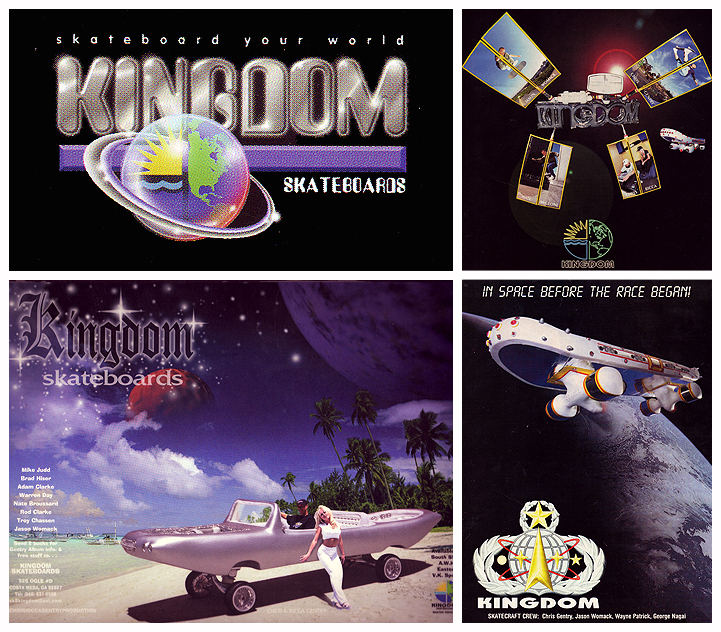 The Skatecraft, Skateboard Lowrider, Skateboard Limo and the Skateboard Monster Truck were all models I built by hand from scratch out of balsa wood, Macro bond, Super Glue and countless hours of sanding and painting. Each model took 3 months to build. They were used in Kingdom Skateboard advertisements from 1996 - 2000. All these models are planned to be built full scale real soon. The first ever real skateboard car comes to life and does an ollie on hydraulics. Hittin Switches in a skateboard car was a Kingdom Ad of a K Grind down a handrail. Check'em out in the near future on the all new "Ridaz Gotta Ride" TV Show. 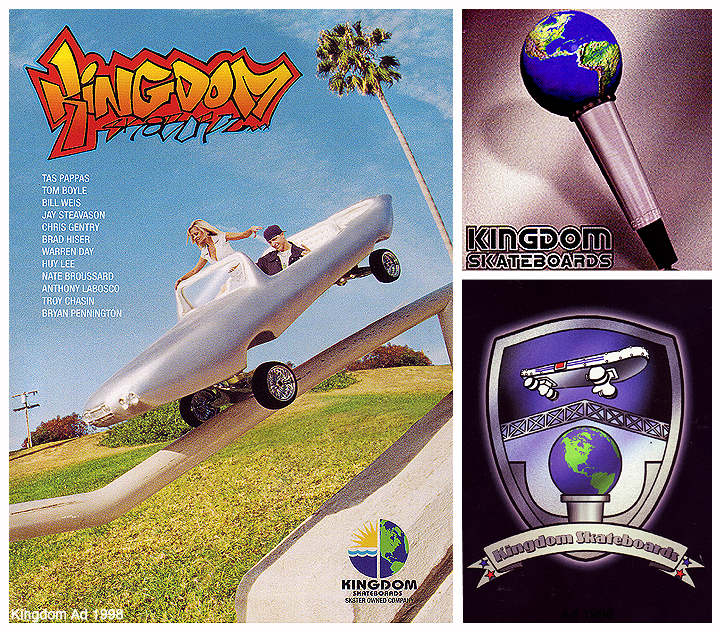 The Kingdom Castle model was built in 1995 for an advertisement for Transworld. Fantasy in Reality was the marketing at the time. It took over 6 months to build this model and a lot of sanding and patience. It was the landing gates for the Galactic Skatecraft. The skateboard B bowl was my first model project I built back in 2004 out of straight balsa wood and Macro bond. I always wanted a B bowl so I built a mini version. Now I skate one just like it in Houston at the Lee and Joe Jamail Skatepark. Concrete. The Kingdom Trade Show Booth was built in 3 weeks in my driveway in Costa Mesa, CA. in 1996 solo style. It had 50 flashing lights and it was 20' long by 2' thick by 8 feet tall made out of particle board, 2x4's, woodscrews, paint and sticker paper.

All the models were displayed around the booth and you entered the booth to place an order through the N. A lot of hard work but somebody had to do it. Ridaz Gotta Build! CG